Josefina is founding member and managing director of CreArtBox, an ensemble whose programs present wide-ranging multidisciplinary connections between music and other art forms. CreArtBox has been awarded by the INJUVE Chamber Music Competition, Montehermoso Contemporary Creation Award, Savvy Musicians in Action Chamber Music Competition, the Queens Council for the Arts, the Amphion Foundation, and the Alice M. Ditson Foundation.

CreArtBox is an award-winning multidisciplinary music ensemble based in New York City led by flutist Guillermo Laporta and pianist Josefina Urraca and known for its merging of classical and contemporary music, with visual art, stunning stage design, and cutting-edge technology.

A platform to foster the creation and presentation of new works in music, also combined with traditional repertoire.

CreArt Music Series is a program presented by CreArtBox in partnership with Greenwich House, the New York Society for Ethical Culture and Plaxall Gallery offering 3 to 7 public performances per year from October to May.

On these performances, audiences of all ages gather together to experience a unique event where classical music meets visual art creating an exceptional experience.

This project also encourages the creation of new compositions of music, combined with traditional music repertoire, and other disciplines, providing creators and performers a platform for working together, creating, recording and presenting new works to the public.

The first venue of the series was the DiMenna Center (New York) where CreArtBox presented two performances, in September and November 2016.

A music festival designed for the New Yorker, CreArt Festival aims to present classical music to a much wider, and younger audience.

Combining musical repertoire old and new with stunning visual projections, CreArt launches its second annual music festival in the heart of the fastest-growing community in the country, Long Island City. Hosted in the wonderful Plaxall Gallery, the CreArt Music Festival will feature three evenings of exciting music from local and international artists across labor day weekend, August 30th – September 1st. From behemoth works such as Oliver Messiaen’s Quartet for the End of Time to the premiere of a new chamber opera, the festival will present audiences with eclectic programming accompanied by live video mapping projection and lighting design. CreArt invites all from the community to join us for three great nights of art.

This CD, with its ardor for the 19th-century and the beginning of the 20th-century music, reimagines the music for violin and piano of Claude Debussy and Ottorino Respighi, expanding it into the repertoire of the modern flute. The recording was made in the Summer of 2016 at Oktaven Studios, New York City.

A one act dance opera that scrutinize the genesis of our choices, consciousness, addictions, routines, and love.

We are who we are, and we are where we are because of the infinite decisions we have made in our past. With this premise, Two Roads scrutinizes the genesis of these choices, exploring the root of our consciences tied to our family, and the conscious and unconscious decisions that we make constantly, including addiction and routines, balance, guilt, and love.Two Roads is a chamber opera for mezzo-soprano, physical actor, choir & dance ensemble, electronics, piano, percussion, and movable set. Though framed as an opera, the work wholeheartedly embraces its interdisciplinary nature, following a parallel creative process that showcases the set, choreography, and light and sound design in earnest, displaying CreArtBox at its best.

AWAVE is a multimedia concert experience for flute, piano, video, and electronics written by Guillermo Laporta. Rooted in the influences of the symphonic sound, classical chamber music, theatrical sound design, and soundtrack composition. AWAVE blends sound and space through Guillermo’s own music, words, and images. 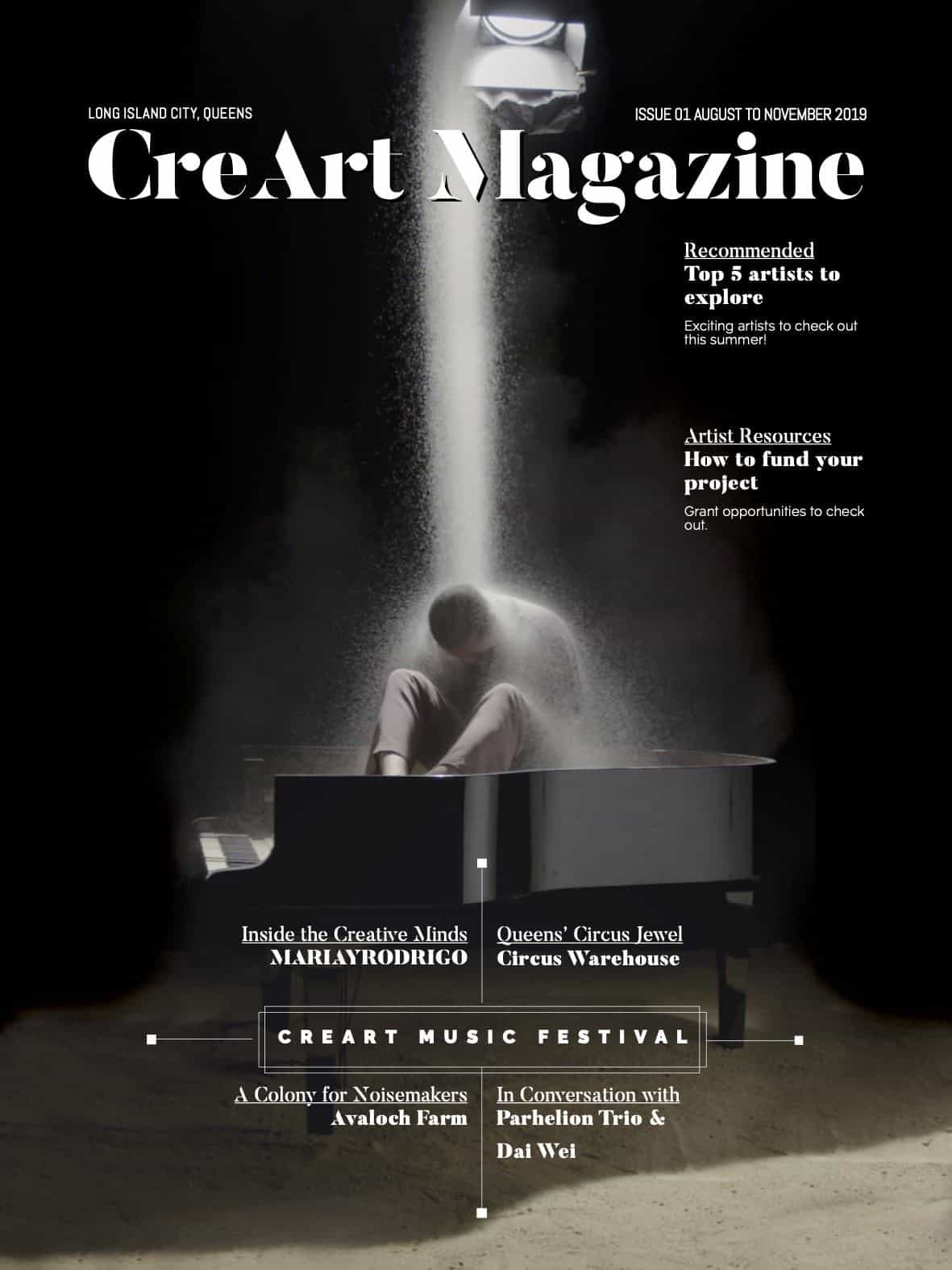 CreArt Magazine is an independent printed and digital publication by CreArtBox.